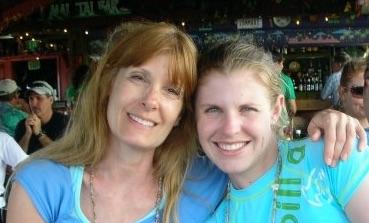 It is with tremendous sadness that I inform you of the tragic automobile accident that took the lives of two of your colleagues yesterday morning, August 13, 2015.  Dr. Diane Defenbaugh, and her daughter Dr. Kathryn Defenbaugh, were traveling on SR 125 in the Chula Vista area around 10:00am, when another vehicle, traveling in the opposite direction careened through the enormous and unobstructed center divide and struck them head-on. Apparently Diane died almost immediately and Kathryn died while EMTs were working to save her life.  The driver of the other car was injured and taken to the hospital.
Most local media sources are reporting sketchy details, as their names were not immediately released. Originally the police investigators indicated that it was the Defenbaugh's car that lost control and crossed over into oncoming traffic, but soon corrected their reporting to say that it was the unnamed male driver's car that had crossed into oncoming traffic.
Dr. Diane was a 1979 graduate if the University of Illinois. She relocated to San Diego, joined the SDCVMA the same year and began her career at the Main Street Animal Hospital. Owners Drs. Tom Mulligan, now deceased, and Michael Kelly, soon opened a second practice, the Angel Animal Hospital in the North Park area, for which Diane became the primary veterinarian, along with Dr. Rob Tugend. She worked her entire career there, and leaves a cadre of dedicated long time staff. (Both locations are now a part of the VCA family.)
Dr Kathryn, aka "Katie", was a 2013 graduate of UC Davis. Following graduation she remained in San Diego, joined the SDCVMA and landed an internship at Pet Emergency and Specialty Center. Following that, she recently accepted a position at the Banfield Pet Hospital in Chula Vista.
On the day of this tragic loss of two beloved veterinarians, mother and daughter were on their way to celebrate Dr. Katie's 29th birthday and swim with the dolphins at Sea World.
Dr. Diane's three siblings will take the ladies home to Chicago, as they had no family remaining in San Diego. It is not expected that there will be family services here. My condolences to their friends, that remain devastated, and to this veterinary community that has suffered a horrific loss.
Pauline White,
Executive Director
2015

I was Kate's Latin teacher at UCSD 7 or 8 years ago.  I am devastated to read about her and her mother's death.  I got to know Kate quite well, wrote a letter of recommendation to UC Davis, and wished I could have persuaded her to major in Latin (and Greek).  She was really good at both.  She always talked about her mother, and how she planned to be a veterinarian like her mother.  The randomness of this is numbing.  Both gone at once.  I feel for her loved ones.

I will miss her since she did take care of my cats when she was my vets.  When I found out that I was moving she gave me a big hug and that is when we said our goodbyes.